Brooches. The Most Stylish Accessory of This Spring | World Fashion Channel
Our site uses cookies and similar technologies to ensure the best user experience by providing personalized information, remembering marketing and product preferences, and helping you get the right information. By continuing to browse this site you agree to our use of cookies following this notice concerning this type of file. If you do not agree that we use this type of file, then you must set your browser settings accordingly or not use the wfc.tv website.

Home / Articles / Fashion / Brooches. The Most Stylish Accessory of This Spring
by Tamila Kurbanova

Brooches. The Most Stylish Accessory of This Spring

The most aristocratic accessory is back in fashion this spring, reviving not only evening, but also casual wardrobe.

What brooches to wear this spring: trends from runways We can safely say that brooches are one of the first known accessories because the first models appeared in ancient times. Earlier, they were used not to decorate clothes, but to fasten cloaks and capes. People started decorating brooches with precious stones, gold and silver much later.

In the era of palace coups, this accessory had a spy subtext: choosing a brooch with a particular pattern and depending on the place where it was pinned, noble ladies could transmit encrypted signals to each other without words: the time and place of a secret meeting, the result of a secret conversation, or fresh rumors. The most popular motifs were bows, angels and flowers, and later on they were replaced by insects – butterflies, beetles, dragonflies and abstract geometric weaves. Now this accessory does not carry any secret meanings, and is used only as a decoration. In the spring/summer 2020 season, designers offer not to be limited to one style and wear both huge brooches in the form of insects and laconic metal pins without stones and rhinestones.

Previously, large brooches with logos of famous fashion houses used to be found only at fashion shows, and they were rather bright elements of the show than harmonious details of looks. Now these models are in permanent collections of leading brands and become a part of the everyday wardrobe of many girls, despite their massiveness and pretentiousness. One of the hottest trends of this season is the appeal to the style of Baroque and Rococo. Pay attention to large models from yellow gold with complex geometric shapes, decorated with colorful stones, thin chains and elegant little brooches.

Another trend that returns from the past is vintage. You can find trendy decorations on the websites of jewelry stores, in grandma's jewelry box and European flea markets. Dark metal, fancy shapes, small colored stones and pearls - you can wear a brooch, not only in the neckline, but also on the shirt collar or as cufflinks, choosing miniature and asymmetric models. If earlier brooches were made only of precious metals and stones, now accessories made of plastic, wood, clay, leather, dried wool, fabric and feathers, which resemble children's jewelry, come to the fore and make even the most strict look gentle and direct. 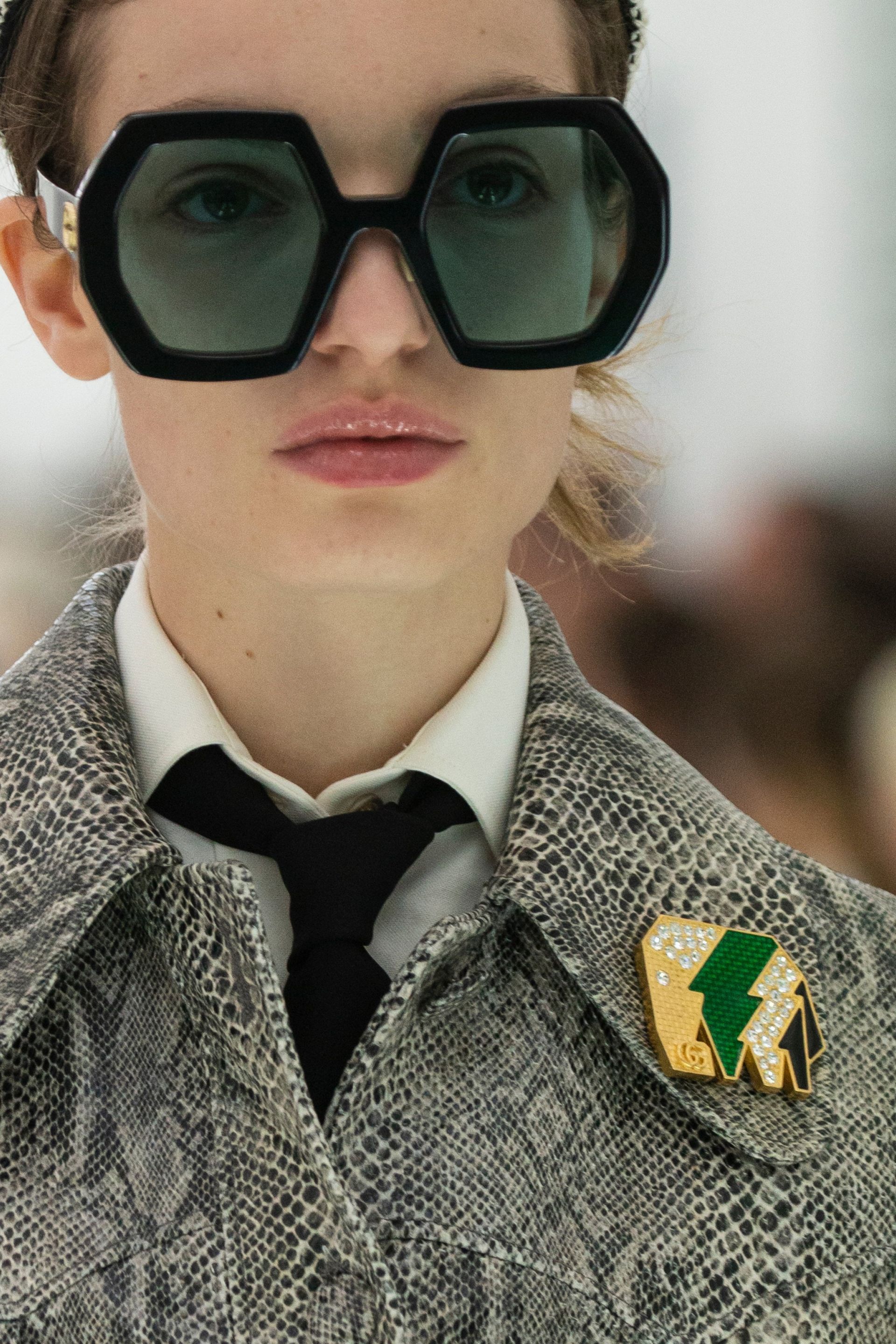 In this season, don’t limit yourself with certain motifs: despite the fact that the trend is the flower, insects, shells, birds and whimsical abstract forms, as if descended from the paintings of Kazimir Malevich, will also look perfect.

It seems that no one in this world loves brooches as much as Queen Elizabeth II does. She uses them not only to complement her look, but also encrypts cute secret message - there are around one hundred family jewelry from the laconic to the most luxurious in her jewelry box.

During one of US President Donald Trump’s visits to Britain, Elizabeth II managed to express her dissatisfaction with his reforms with the help of brooches. For their first official meeting, she opted for the jewelry that Barack and Michelle Obama once gave her. The second one was the accessory that she received from the government of Canada. The Queen never officially commented on her choice of jewelry, but her astute fans know everything without it.

For the Prince William and Kate Middleton’s wedding, the Queen chose a brooch with a romantic name "Love knot". In shape, it resembles a bow made of white gold, decorated with transparent diamonds. This accessory went to the Elizabeth II from her grandmother – Mary Tekskom, who first wore it to her wedding to George V as a sign that now they're now bonded for life.

The veru first brooch that Queen Elizabeth II received, when she became the new Queen of Great Britain, is called the "Fire Lily". This decoration was presented to her during her official visit to Africa. To make this platinum accessory with 301 diamond, about 42 thousand teenagers from southern Rhodesia donated part of their pocket money, so the Queen appreciates this brooch more than others and saves for trips to other countries.

And for the wedding of Prince Harry and Meghan Markle, the Queen chose a brooch that was worn only a few times – "Richmond" from yellow gold with large pearls. By the way, before the ceremony, some bookmakers even took bets on which jewelry Queen Elizabeth II will choose for the ceremony – no one succeeded.

12 perfect brooches for this spring

Wear brooches not only with formal, but also with casual outfits, pinning them on jackets, capes, vests and coats, as well as on shirts, dresses, hats, such as berets, caps, hats or silk scarves or even use them as a hair clip.

Who said that there should be only one brooch? This season, designers advise to forget about minimalism and wear several jewelries at once - the key point here is that they shouldn’t contradict each other in style. It’s only better not to mix plastic with diamonds, and platinum with beads.

From elegant silver pins to complex jewelry with many details - we have compiled our selection of perfect brooches that will be trendy this spring and will add variety to the wardrobe of any fashionista. 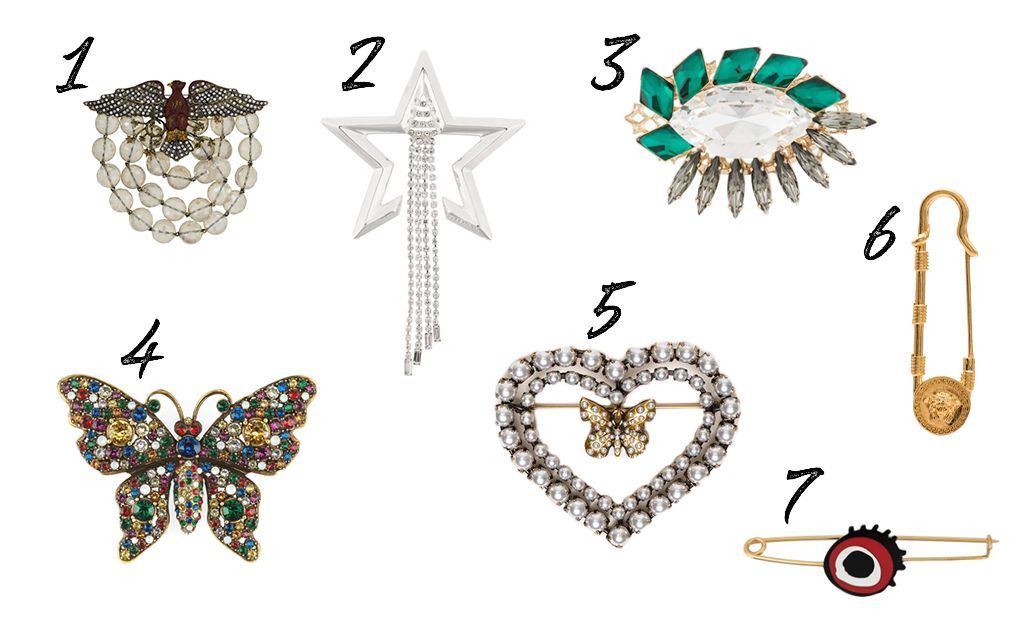