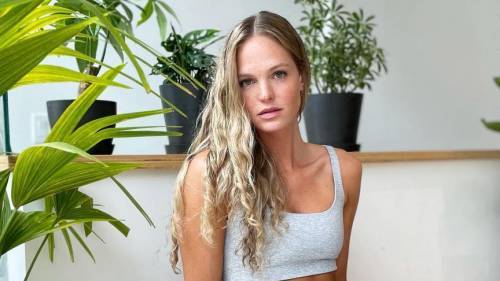 32-year-old American model Erin Heatherton, also known as the Leonardo DiCaprio ex-girlfriend, became a guest of the C13Originals podcast. In a candid interview hosted by Justin Harman and Vanessa Grigoriadis, Erin revealed the shocking truth about modeling and the legendary "angels" of the Victoria's Secret lingerie brand.

Heatherton took part in the famous Victoria's Secret shows and campaigns from 2010 to 2013, and, despite the fact that many models dreamed of being in her place, these years turned into a real challenge for Erin herself.

"Where things started to go south for me was when I hit, I think it was 25 [years old]," Heatherton says in the podcast. "There was this certain point where everything that I was doing just didn't yield the same results. I was just a little bit bigger. In retrospect, that's just biology and how the body works. You're not the same size when you're 18 to when you're 25."

The model, who has collaborated with Chanel, Marc Jacobs and Prada, noted that the Victoria's Secret management put pressure on her, and she was so afraid of losing her job that she decided on desperate measures in the fight against extra pounds. At one point, she starting seeing a nutritionist who put her on a diet pill called phentermine, an appetite suppressant. Heatherton's therapist would later call this pill “bathwater meth.” As it turned out later, according to the principle of action, it is similar to drugs. In addition, the model injects a special hormone into the abdomen every morning, which is usually produced in pregnant women. At the time, it was mistakenly believed that this could lead to weight loss, however, as Erin admitted, all this led to problems with physical and emotional health.

“I don't know. I was just like, 'Let me Lance Armstrong this because I'm renovating my condo. I can't lose my job right now,’’ she tells Grigoriadis and Harman. “I started injecting myself with HCG.” Heatherton continues, "I look back at it as like emotional cutting because I was so against everything that I was doing, but I was just reluctantly doing it almost to feel the pain or feel how wrong it was."

The model admitted that after working with Victoria's Secret, she had to seek help from a psychologist. According to Heatherton, the company's management did not care at all about the welfare of their "angels." The 32-year-old is in a much better place now. "I share my story again because I don't want anyone to have an eating disorder or hate their bodies," she says. "I know what that feels like. I speak out only for people that might hear me and think, 'Hey, that makes sense,' or maybe that might change their attitude towards how they treat themselves."