The Most Stylish Star Looks of 2019 | World Fashion Channel
Our site uses cookies and similar technologies to ensure the best user experience by providing personalized information, remembering marketing and product preferences, and helping you get the right information. By continuing to browse this site you agree to our use of cookies following this notice concerning this type of file. If you do not agree that we use this type of file, then you must set your browser settings accordingly or not use the wfc.tv website.

After every social event, looks of celebs are examined as if under a microscope. Attentive fans notice even a small detail and don’t forgive their favorites a single mistake. But some celebs always manage to look stylish and bright. Let’s remember the most successful celebrity outfits, which wows us this year.

Many stylists think the Zendaya’s one-shoulder asymmetric silk charmeuse gown by Vera Wang to be the best look of the Emmy Award 2019 was. Unfortunatelly, Euphoria star was not eligible for any Emmy Awards, but could steal the spotlight that evening. The emerald green dress features sheer corset detail and a hip-high slit, while subtle draping at the waist creates an ultra-flattering affect.

Recently, Zendaya has been under the scrutiny of the press and fans, so it is very important for her not to make fashion mistakes - and we must say she copes with this task just fine.

Kim Kardashian’s dress has become one of the most gorgeous outfits of Met Gala 2019 and a real fashion torture at the same time. The star said that in order to squeeze into the tiny outfit by Thierry Mugler, she had to wear a corset so tight that it was impossible to sit down without breaking a rib. Four assistants helped her to fasten this work of art, but the effect that Kim had on the audience was worth it.

The diva looked like as she just had emerged from the water. The outfit was thought over by the designer for eight months, but there were those who didn’t like the “wet” outfit. Haters found, that girl’s waist looked unnaturally thin. Kim was defended by her personal stylist: “She goes to the gym six days a week - that’s quite obvious”, the woman said.

Kylie Jenner's golden dress did balance on the verge of vulgarity, but the beauty mogul managed not only to pacify this outfit, but also to look like a real queen.

The model opted for this outfit to come to her friend Haley Bieber’s wedding, and many noticed that Kylie almost outshone the bride. The dress, made in the form of liquid gold flowing down the body, was created by the J’aton Couturebrand and perfectly emphasized the girl’s figure.

In this yellow Maison Yeya satin and organza dress, Jennifer Lopez appeared at the Hustler premiere in Toronto. That evening, she looked absolutely luxurious, but J Lo’s triumph was marred by the zoo activists who shouted slogans while the star were posing for photographers. The young woman has long been accused of wearing clothes made of leather and fur.

Porter’s famous black velvet tuxedo dress turned out to be too extravagant and discussing. Meanwhile, the golden costume embroidered with crystals and complemented by a bright pink cloak, in which the actor came to the Golden Globe, impressed many spectators of the ceremony. Billy Porter’s message and desire is not only to shock: the actor is fighting to ensure that all gender stereotypes are erased and everyone can express themselves through fashion the way he or she wants. 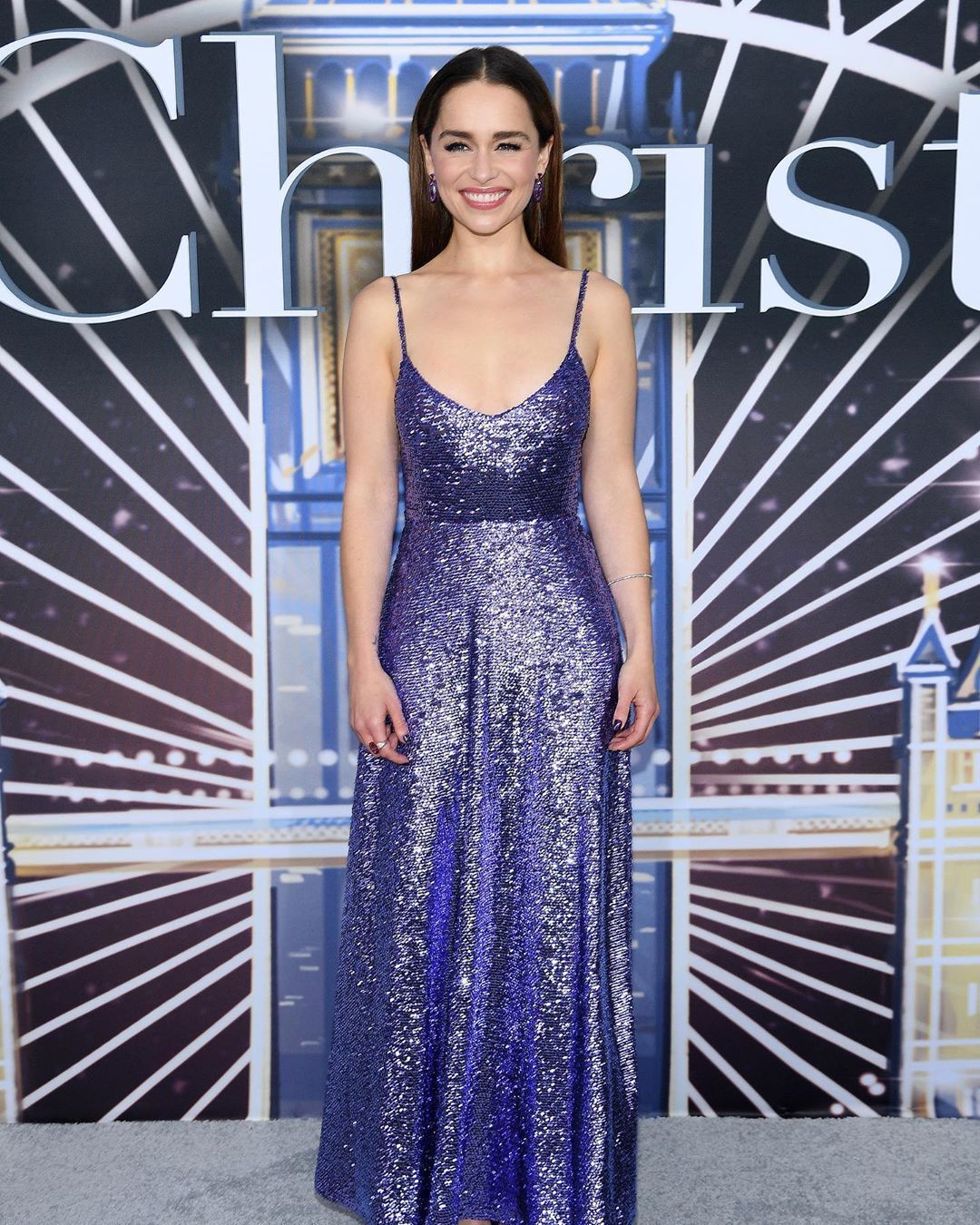 The simple but luxurious purple Valentino dress, which actress Emilia Clarke opted for the premiere of Last Christmas film, perfectly matched the atmosphere of the event. The girl hit the red carpet in the outfit with thin straps, fully embroidered with sequins. Simple styling and massive matching earrings completed her look.

The actress said that she wanted to look like a beautiful New Year’s toy that evening, and the designers of the fashion house helped her a lot. It seems that we have figured out the secret of Emilia Clark’s popularity: elegance, a charming smile and a pinch of self-confidence.

This luxurious purple Valentino dress became famous not only for making Lady Gaga one of the most stylish celebrities of the Golden Globe Award 2019 ceremony. A few months ago it became known that the very gown was stolen by one of the employees of the hotel, where the singer stayed, and immediately was put on sale.

Of course, it was not possible to sell such a noticeable outfit - the thief was quickly arrested. Nevertheless, lavender outfit with a long train brought Lady Gaga luck: the singer won in the "Best Song" nomination for her hit Shallow.

Harry Styles chooses stylish outfits not only for his concerts, but also for social events. The pantsuit, in which the singer came to Met Gala, immediately topped the lists of the most stylish looks ever.

For the Metropolitan Museum ball, the One Direction ex-lead singer put on a black blouse with a large organza bow, trousers and boots with a small heel. He also made a multi-colored manicure, put on several massive rings and a pearl earring. The singer said that he doesn’t connect fashion with gender: for him, beautiful clothes are just a way to demonstrate his creative nature.