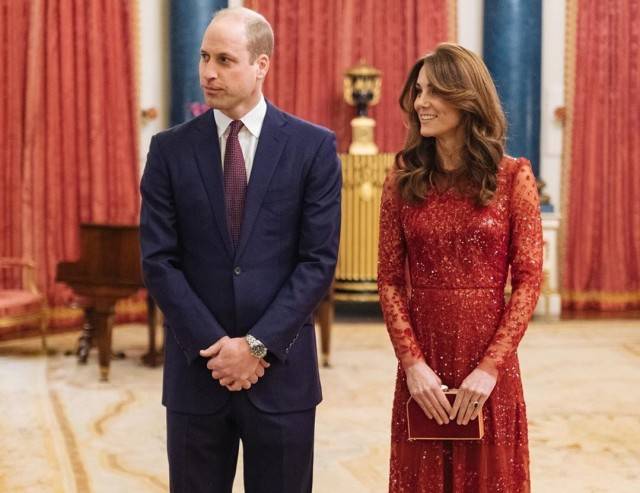 January 20, Prince William and Kate Middleton hosted a reception at Buckingham Palace Monday on behalf of Queen Elizabeth II. The reception was held in honor of the UK-Africa Investment Summit, which is taking place in London, and brought together representatives of many states.

For the official evening, the Duchess of Cambridge opted for the midi-length glittering dress by Needle & Thread and matching red heels by Gianvito Rossi. She completed the look with a gold-edged clutch from one of her favorite British brands, Jenny Packham. She wore her hair in her signature bouncy blowout.

Kate and William were accompanied by the youngest son of Elizabeth II, Prince Edward, along with his wife Sophie. It is assumed that, the couple might be a good choice to take over some public royal duties now that Meghan and Harry are not working in an official capacity for the family. Their children, Lady Louise, 16, and James, Viscount Severen, 12, are growing up, and this will allow them more flexibility to carve her own path.

Prior to this, the couple rarely appeared at official events, however, many media called Sophie the Queen's beloved daughter-in-law - the woman has the right to accompany Elizabeth II in one limousine and represent her interests on foreign trips.

Golden Suit and Heart of the Ocean Necklace: Recalling Celine Dion’s Brightest Looks
Elsa Hosk Shows Off Her Shoe Collection (and this is just a small part of her luxurious wardrobe!)
18 Stylish Polka-dot Dresses, That Will Come in Handy This Spring
Fashion Weeks in Paris, New York and Milan Are Postponed Due to Coronavirus
Coziness and Comfort: 5 Home Looks from Actress Emma Roberts
Brooches. The Most Stylish Accessory of This Spring
Trendy Windbreakers 2020: How to Wear Them This Spring
5 Stars with Really Big Feet
Spring's Main Purchase: Tuxedo Dress, Like Heidi Klum's
Aesthetics of the Middle East: Alena Akhmadullina Presents the SS 2020 Collection Lookbook
Новости СМИ2