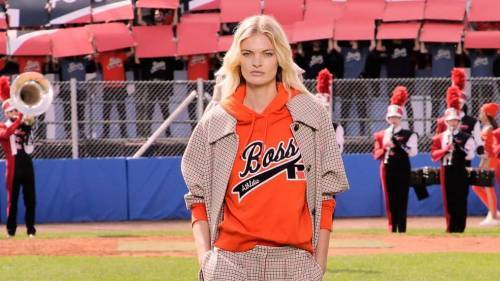 The FashionUnited platform has revealed the name of the most popular show in the Fashion Week history. It turned out to be the joint show of the Hugo Boss x Russell Athletic spring-summer 2022 collection at the last Milan Fashion Week.

The collection was presented in the Kennedy Sport Center baseball stadium in Milan, and the organizers tried to recreate the atmosphere of a real sporting event. The show was accompanied by a brass band’s performance and girls from the cheerleading group, as well as shouts from fans and even flashes of smoke bombs.

Well known models such as Irina Shayk, Gigi Hadid and Adut Akech were among those who walked the runway. Among the guests were fashion blogger Chiara Ferragni, Canadian actor Avan Jogia and TikTok star Khaby Lame, who also had the honor to close the show.

According to FashionUnited, creative director Eyan Allen's new collection has become the most popular not only in Hugo Boss brand’s history, but in the entire history of Fashion Week. Along with the almost 4 billion impressions of the event, the company managed to achieve 25 million engagements across their social media channels, and 2.2 billion views on the #Bossmoves challenge. Interaction with the Boss ******* account increased by almost 1600 percent.

It is noted that such impressive indicators were achieved largely thanks to the social media presence - for example, Chiara Ferragni's audience is 25 million followers on *******, and more than 110 million network users have subscribed to TikTok star Khaby Lame. A colorful show and a sporty collection of bombers, sweatshirts and joggers also caught the attention of the audience.