Utilitarian clothes as a protest statement to power and restrictions 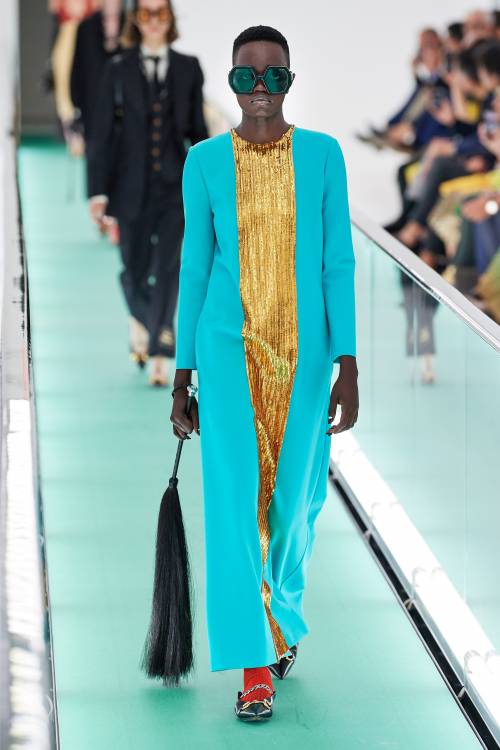 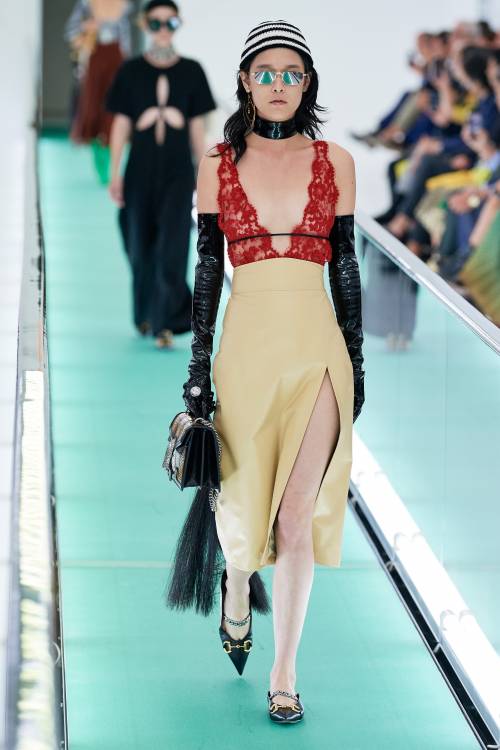 The sexuality of the collection is further underlined by laces, which could be inset in the long black gloves and a cut-out burgundy top, combined with the bleak yellow high-slit maxi skirt and pointy nose ballet shoes. The designs are gender-fluid, allowing each a freedom of expression

What anybody during Milan Fashion Week 2019 could grasp, was that Gucci SS2020 collection leitmotif is all about sensuality and sexuality. It comes then by no surprise that provocative Alessandro Michele, Gucci creative designer, titled the collection “Orgasmique.” Among its most standing-out thematical pieces it is possible to find slip - dresses, chokers, and riding crops.

As the fashion show space had previously been an aircraft factory, models showcased 89 looks going along the moving walkway, just as if the catwalk was at an airport with its crystal white walls. Held at its new headquarters called ‘Gucci Hub,’ the show was divided into two parts. Its beginning might have left its audience at a loss: underneath the flashing red to white lights, models came out of the metal gates wearing fully white straight jackets and uniforms – and then suddenly the lights cut out. Later Michele explained that the showcased utilitarian clothes were not for sale but instead was his protest statement to all “restrictions imposed by society and those who control it.”

In contrast with almost identical prelude looks, the second part of the show was to present the glory of freedom of choice, creativity, and self-expression. Referencing the Gucci styles of the 70s and 90s, the garments are designed in a color-blocking technique: such as the combination of the azure blue trench and the maxi golden yellow dress or the saturated green wool vest and the transparent violet skirt.

Taking inspiration from the Gucci Fashion House’s equestrian heritage, Michele accessorized almost every look with a choker, ranging from a thin lace to the massive black leather cloth and an extravagant riding crop. The sexuality of the collection is further underlined by laces, which could be inset in the long black gloves and a cut-out burgundy top, combined with the bleak yellow high-slit maxi skirt and pointy nose ballet shoes.

“I’m afraid of getting bored. I always have to try something new,” Alessandro Michele stated in his post-show press conference. His words align with the collection’s message that Gucci revives a new artistic chapter, bringing a breath of fresh air into its designs and ideas. This could be also said regarding the color palette and the patterns: the predominance of black, as well as a color-blocking and absence of prints, are the new choices of the brand.  The designs of the garments also tend to be gender-fluid, embracing the spirit of freedom.