Harry Styles May Be Recognized as the Most Stylish Men of the Decade | World Fashion Channel
Our site uses cookies and similar technologies to ensure the best user experience by providing personalized information, remembering marketing and product preferences, and helping you get the right information. By continuing to browse this site you agree to our use of cookies following this notice concerning this type of file. If you do not agree that we use this type of file, then you must set your browser settings accordingly or not use the wfc.tv website. 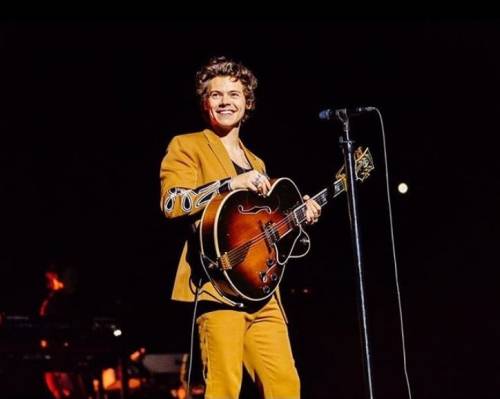 The GQ readers are voting for their most stylish man of the decade. The voting on GQ’s Instagram page has chosen 8 out of 16 most stylish men. Three of them are athletes: David Beckham, LeBron James and Roger Federer. The other three are Ryan Gosling, Harry Styles, Jonah Hill, Tyler and Timothée Chalamet.

The final decision will be made by Instagram users, too. However, it seems that the editors know their winner. It’s Harry Styles. Why? Let’s find out!

The British singer Harry Styles became famous thanks to the world famous group One Direction, but then the singr decided to build his solo career. However, now Harry is discussed not about musical talent, but about his impeccable sense of style.

Styles’s style (calling surname) has undergone significant changes. At the very beginning of his career, a young man preferred the simplest clothes possible - jeans, T-shirts with bright prints. Then, over time, he started to experiments. Instead of hooligan t-shirts Harry opted for bright shirts, stylish coats and hats. In 2013, he was even recognized as the most stylish celebrity according to the British Fashion Awards.

Harry didn’t stop at this achievement and continued to hone his own style. As a result, Styles is called a real trendsetter in the world of the fashion. The singer looks equally stunning in Sleazette Gucci tailoring, high-waisted sailor pants, jacquard Kapital knits and giant purple corduroy pants.

At the same time, critics point out that Styles never looks ridiculous: even when he is wearing a sparkly denim suit, or a sheep-print sweater vest, or an orange circus-stripe coat over an argyle sweater and short-shorts with loafers. Everything he puts on looks instinctive—which is what personal style really is. Doing what feels right. His suits look a little rumpled. His shirts are unbuttoned with chaotic casualness. He manages to look sexy and easy at the same time. The use of a large number of accessories and jewelry is another Harry’s fashionable technique.

By the way, Styles works with a stylist, Harry Lambert. The successful tandem did its best and achieved balance between style and sloppiness.  This is the secret and the reason for Harry to be called the most stylish man of the decade.