Yves Saint Laurent: from the Mondrian dress to the female-empowering | World Fashion Channel
Our site uses cookies and similar technologies to ensure the best user experience by providing personalized information, remembering marketing and product preferences, and helping you get the right information. By continuing to browse this site you agree to our use of cookies following this notice concerning this type of file. If you do not agree that we use this type of file, then you must set your browser settings accordingly or not use the wfc.tv website. "The most beautiful clothes that can dress a woman are the arms of the man she loves. But for those who haven't had the fortune of finding this happiness, I am there." The history of the legendary French couturier and his eponymous fashion house is inextricably linked with a revolutionary look at familiar things and a love of art.

Yves Saint Laurent's career seems to have been successful from the very start. After graduating from the Chambre Syndicale de la Haute Couture School in Paris, he won the Woolmark design competition. His talented work attracted the attention of Vogue Paris editor-in-chief Michel de Brunhoff, a man who had a tremendous influence in the fashion industry. Thanks to his patronage Saint Laurent managed to get to work for Christian Dior. After the sudden death of Christian Dior, 21-year-old Yves Saint Laurent led the legendary fashion house, becoming the youngest couturier in the history of fashion. He presented his first independent collection as the chief designer of Dior in 1958. The whole world started talking about young talent, and the silhouette "trapezoid" invented by him became a real fashionable revolution. After 2 years, a completely different revolution took place - Algeria, Saint Laurent's homeland, began the struggle for independence. The couturier was forced to leave Dior and go to the army.

Returning from service in 1961, Yves Saint Laurent decided to launch his brand. After several years at Dior, he had a clear idea of what a modern woman should look like. His fresh look at the beauty of the female body and seductiveness has become a breath of fresh air for the fashion world.

In 1965 the designer presented his iconic 'Mondrian collection" that was a homage to the work of several modernistic artists. The most famous part of this collection was 6 Mondrian cocktail dresses. Yves Saint Laurent was inspired by a book about Piet Mondrian, which his mother had given him. Based upon a picture of the artist, he created a model of a cult dress with black lines and blocks of primary color. He managed to transfer the painting on a woman, made the wardrobe item from it as well as to showcase the fluidity of the culture. A year later, Yves Saint Laurent releases his most discussed collection, which has caused a lot of controversial reviews. The bone of contention was "Le Smoking" - a black tailored tuxedo with a satin side stripe, worn with a white ruffled shirt. While buyers hesitated to display the scandal tuxedo in stores, style icons such as Bianca Jagger, Catherine Deneuve, and Nan Kempner included it in their wardrobes. Throughout his career, Yves Saint Laurent has repeatedly drawn a parallel between fashion and art. In 1976, he created a collection dedicated to Russian ballet and opera and presented as a theatrical show that took place in the golden halls of the InterContinental hotel. In the 80s, Saint Laurent dedicated his collections to the works of Henri Matisse, Vincent van Gogh, impressionists, cubists, as well as actors and people of art who had a great influence on his life and work.

By the mid-1990s, it became obvious that Yves Saint Laurent could no longer cope with the work in full, so it was time to search for a successor. In 1998, the leadership of the fashion house appointed Alber Elbaz to the position of chief designer, while Saint Laurent reserved the right to develop a couture line. Hedi Slimane was invited to work on men's collections.

In 1999, the Italian company Gucci acquired a majority stake in Yves Saint Laurent. One of the first decisions made by the new owners was the change of creative director of the ready-to-wear line. So, Alber Elbaz was replaced by Tom Ford. Hedi Slimane also left the company in the early 2000s. On January 7, 2002, Yves Saint Laurent announced his decision to close the haute couture line and end his career. There were no specific reasons that prompted the designer to say goodbye to the world of fashion, but most experts agree that this was due to the disappointment in modern fashion and the reluctance of Saint Laurent to adapt to the realities of the 21st century.

In 2000-2004, Tom Ford became the chief designer of Yves Saint Laurent and managed to make the brand "in trend". Ford's collections looked incredibly modern and set the trend, so sales were steadily growing. A significant role in attracting buyers was played by the new fashion house image created by Tom Ford. The designer relied on sexuality and provocation, offering the public frank advertising campaigns with completely naked models.

In 2004, a conflict with the owners of the company made Tom Ford leave Yves Saint Laurent. His post was immediately given to Stefano Pilati, who had already worked at Yves Saint Laurent for 4 years helping to create ready-to-wear collections.

In the first months, the new creative designer spent a lot of time studying YSL archives. As a result, Pilati offered customers a modern classic: the brand and incomparable style of Yves Saint Laurent, which was interpreted by Stefano in his way and adapted to modern fashion, was taken as a basis. As a result of these transformations, Yves Saint Laurent has once again become one of the best and most demanded luxury brands. 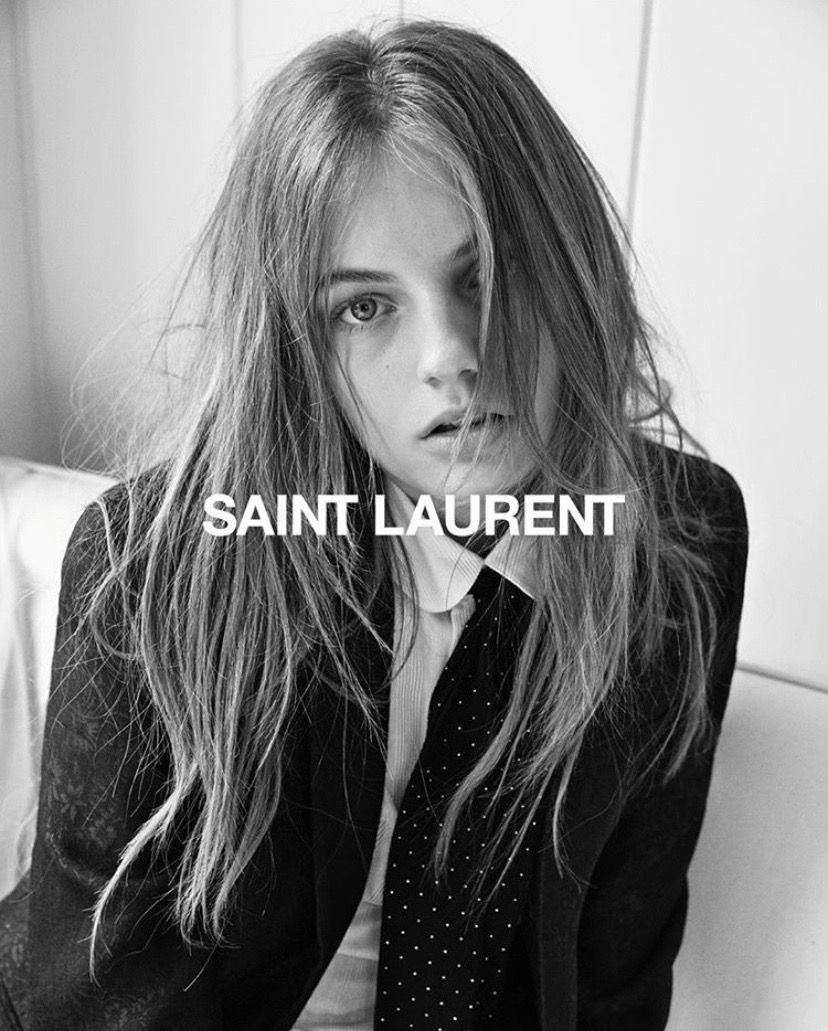 In 2012, Stefano Pilati was replaced by Hedi Slimane. Between 2012 and 2016, he not held the rebranding by stripping 'Yves' from the nomenclature but also created the modern 'Saint Laurent look'. His vision of modern women is a combination of rock waves and edgy glamour of the 1970s and 1980s, a mix of luxury and rebellious spirit.

In April 2016, it became known that Hedi Slimane was leaving the Saint Laurent fashion house: despite all his merits, the contract was not renewed.  The name of the new creative director was announced a few days after Hedi Slimane's resignation - it was the Italian designer Anthony Vaccarello, who had previously held a similar position in Versus Versace.

For 4 years, Vaccarello managed to rethink the image of the Saint Laurent woman. He repeatedly quoted the archives of the fashion house, but never copied it. The designer enhanced the effect of "female-empowering" with silhouettes in the spirit of the power-dressing of the 1980s: voluminous jackets and fur coats, blouses with fluffy bows, and massive jewelry, and the use of latex. What we see today is the renewed Saint Laurent woman who knows about her sexuality and power.