Home / Articles / Сelebrities / Amanda Gorman will be a model: 22-year-old poet became famous after speaking at the inauguration of Joe Biden

Amanda Gorman will be a model: 22-year-old poet became famous after speaking at the inauguration of Joe Biden 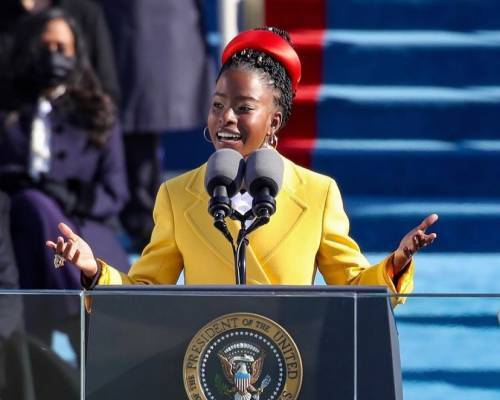 Last week, after the inauguration ceremony of the new US President Joe Biden, the whole world was discussing the stylish looks of Kamala Harris, Lady Gaga, and Jennifer Lopez. Meanwhile, fashion experts drew attention to a new face - Amanda Gorman.

The speech of the 22-year-old activist during the ceremony caused a real sensation on social networks: Amanda read her poem "The Hills We Climb". She became the youngest poet ever to perform at an inauguration. Besides her unconditional talent, Gorman amazed everyone with her outfit, which hit the first stripes of gloss the next day. For the performance, the poet chose a yellow Prada coat and complemented it with a red headband.

Representatives of the fashion industry haven't ignored such excitement for Amanda. The IMG agency, which works with Cara Delevingne, Hailey Bieber, Halima Aden, Bella and Gigi Hadid, offered Gorman to sign a modeling contract. Now the poet will also build a modeling career, participate in advertising campaigns and represent fashion brands. By the way, Amanda already has experience in this area - the activist shot in the Nike advertising campaign.

It is known that Gorman was born in Los Angeles. The mother raised the future poet and her twin-sister alone. From the age of 14, the girl began to write poetry, and after school, she entered the Faculty of Sociology at Harvard University. In 2017, Amanda received a national award in the Young Poet category. Jill Biden herself invited her to speak at the inauguration with her own poem.

"My life, my love, my truth": to whom Brooklyn Beckham dedicated new tattoo