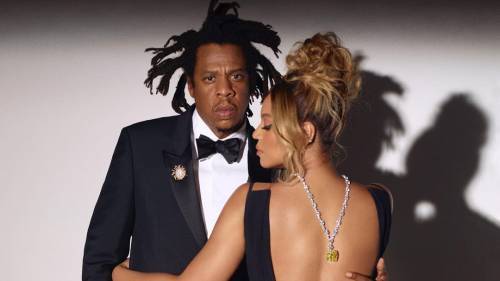 In mid-August, it became known that Beyoncé and her husband, rapper Jay-Z, would become the new ambassadors of the Tiffany & Co. jewelry house. Fresh off news of gracing the cover of Harper’s Bazaar in possibly her most revealing interview ever, Beyoncé is getting in on a dazzling new collaboration with a global luxury brand. In a first for Tiffany & Co., the Tiffany Diamond — which weighs 128.54 carats and boasts an unprecedented 82 facets — will be unveiled for the campaign, per a press release. The piece, which was originally mined in 1877, has never been featured in an official campaign and has only been worn a grand total of 3 other times. The yellow stone was donned by Mary Whitehouse, the wife of an American diplomat, Lady Gaga, who rocked the piece at the 2019 Oscars, and, of course, Hepburn.

The images will be joined by a short film director Emmanuel Adjei created, which will feature a musical performance of the song “Moon River,” written for the 1961 Audrey Hepburn movie Breakfast at Tiffany’s. In Adjei’s film, Beyoncé sings the song and plays piano while Jay-Z records her on a Super8 camera. But it not only makes the power couple’s first joint campaign but also a rare public appearance of a 1982 Jean-Paul Basquiat painting titled Equals Pi that happens to be in the jewelry company’s signature blue. According to Tiffany, the ad is “the result of a close collaboration and a shared vision” exploring “connection and vulnerability.” It’s soon set to take over all of the digital billboards in Times Square, and meant to usher in the jeweler’s “new brand identity.” While this is certainly its highest-profile moment, Equals Pi isn’t entirely unseen. According to representatives of the brand, the “About Love” campaign, shot by Mason Poole and styled by June Ambrose and Marni Senofonte, will launch globally on September 2, and the short film will debut on September 15.