Kim's fault? New details of the story about the ruined dress of Monroe | World Fashion Channel
Our site uses cookies and similar technologies to ensure the best user experience by providing personalized information, remembering marketing and product preferences, and helping you get the right information. By continuing to browse this site you agree to our use of cookies following this notice concerning this type of file. If you do not agree that we use this type of file, then you must set your browser settings accordingly or not use the wfc.tv website.

Home / Articles / Сelebrities / Kim's fault? New details of the story about the ruined dress of Monroe
by Anastasia Komissarova

Last month, Kim Kardashian appeared at the Met Gala ball in the famous dress of Marilyn Monroe, in which the sex symbol sang "Happy Birthday" to Mr. President J. Kennedy. The only appearance of Kardashian in a historical outfit made a splash twice: the first time - at the Costume Institute event itself, the second - a scandal with before / after photos, where traces of fabric damage and fallen off rhinestones are visible. But, as it turned out, the “before” picture was taken in 2016, even at the time the exhibit was put up for auction.

Today, Marilyn Monroe's dress is the most expensive dress ever sold at auction. It is stored in the Ripley Museum in special conditions: a darkened room with a controlled temperature. 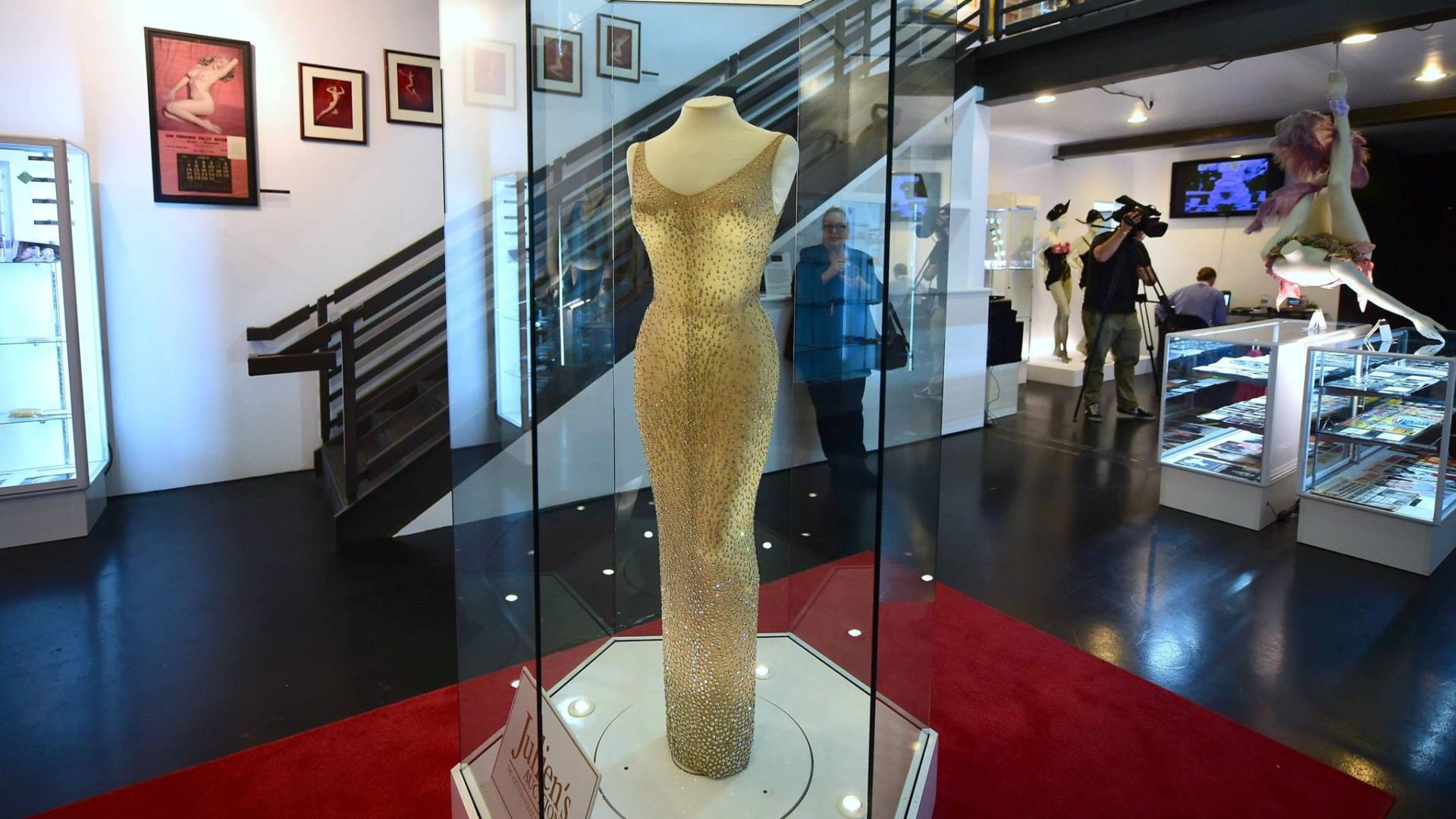 Nevertheless, Kim was allowed to wear the famous outfit, albeit for a matter of minutes. Immediately after the socialite climbed the main steps of the evening, she changed into a replica. Every possible precaution has been taken to preserve the product. It was transported on a private jet sent specially by Kim. Each time the fitting was carried out strictly in the presence of representatives of the museum. One of the conditions that the star agreed to: if the gallery staff think that something is going wrong, they will have even the slightest doubt, the whole process will be immediately stopped. Dress has never been alone with Kim.

“I’m extremely respectful to the dress and what it means to American history,” Kardashian told Vogue. “I would never want to sit in it or eat in it or have any risk of any damage to it and I won’t be wearing the kind of body makeup I usually do. Everything had to be specifically timed and I had to practice walking up the stairs.”

The fitting took place twice. The first time was to make sure that the dress could even be borrowed by Kim. Then Kardashian did not fit into the outfit. The influencer noted that she was extremely surprised by this and "almost cried with grief." She sincerely believed that Monroe was somewhat more magnificent.

The product could not be modified in any way for the sake of the luxurious forms of the modern diva, and Kim herself refused to go to the ball in a different way. As a result, the star had to urgently lose weight. But even after she lost 16 pounds, the dress did not button up all the way and had to be laced up. Kim carefully studied the situation in the mirror and decided to cover the “hole” with a white fur coat. The stylization was successful, very Monroe-esque, and the audience did not even guess anything. A month after the momentous event, the same “before / after” photos appeared on the official account. Collage published June 12, 2022. The picture shows that some of the rhinestones have fallen off, and the thin fabric around the zipper and at the seams has parted. So much for the preservation of "integrity and safety."
@ripleysbelieveitornot was it worth it? — read the signature in the social network.
The comparison quickly went viral. The proof of Kim's "guilt" was the very video from the fitting: despite all the efforts and sacrifices, the dress is still small. People around the world were surprised at the indiscretion of the representatives of the museum, because it is obvious that the parameters of the stars are different. 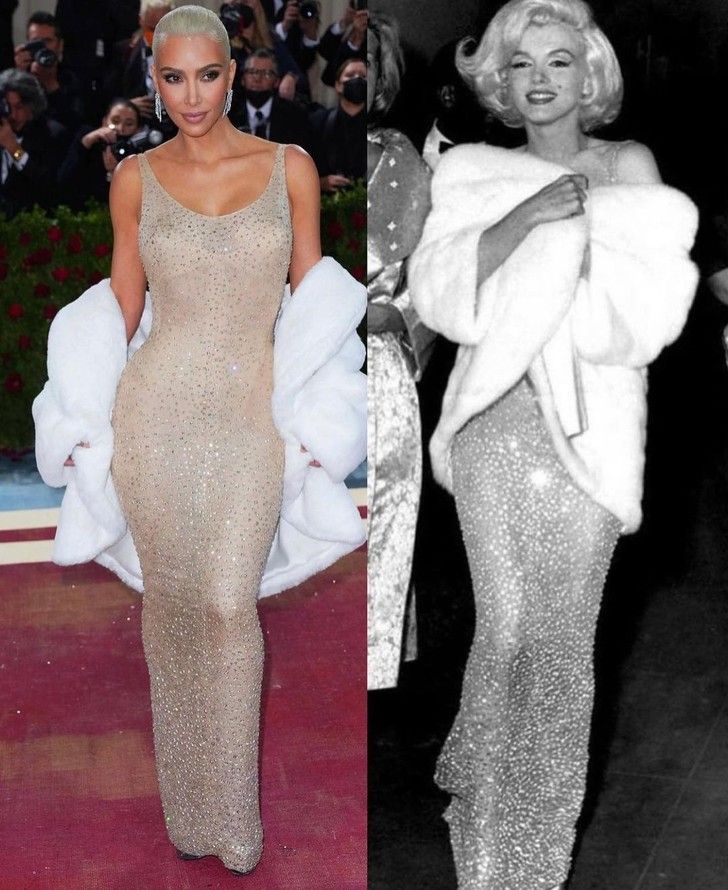 Archivists and restorers took an unequivocal position: wearing a historical costume harms it and is unacceptable. But given that the “before” photo was taken in softer lighting than the “after”, and also 6 years ago, some doubts crept in about Kim’s guilt.

So, a Tik Tok user drew attention to a video posted by the Ripley Museum to document Kim's fitting. And it seems to prove that the rhinestones were missing from the dress even before Kim tried it on. The screenshot shows the same shortcomings as in the “after” picture, even if the lighting is much more complimentary: the crystals are missing in the same way and the fabric around the zipper is visible. 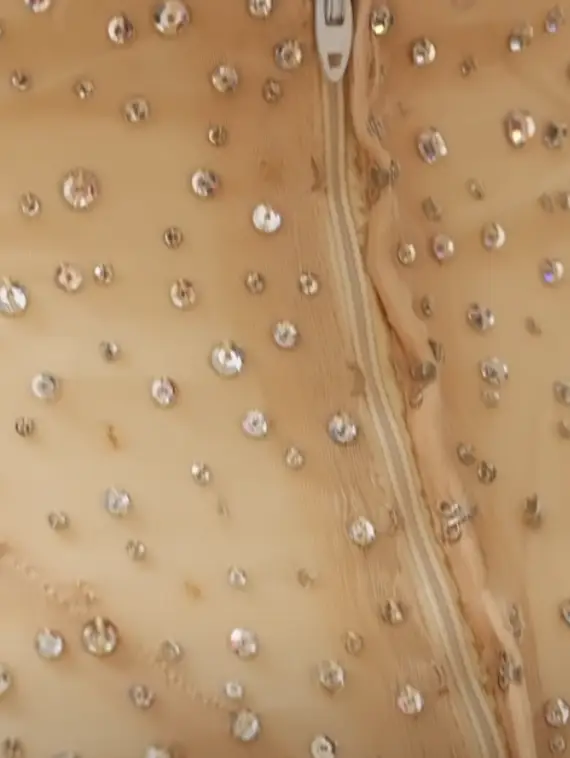 "The damage was done before she even put on the dress - or at least tried to do so," a social media user said. "This is the footage that Ripley shared when Kim came over and tried on the outfit for the first time."
“The rhinestones are missing, the clips are all messed up and it’s not even hidden,” he continued. “So how do we know the dress didn’t look like this [after photo] closed?”

People who watched the video agreed. The comments began to demand a fair comparison, so that both photos were taken with the same lighting. Only then can the real extent of the damage be assessed.

Source: TikTok
Someone noted that the fabric is torn by itself, from time and age, and due to the fact that it is stored in a fastened form, and the fasteners are closed.

Commentators also pointed out that the safety of the dress is the responsibility of the museum staff, who never left Kim alone with the dress for a second. And the consequences of the decision to give Kim the dress must be borne by them.


“…one of our missions is to educate and bring in different and wonderful exhibits, people, places and things that really intrigue the world,” Amanda Joyner, Vice President of Licensing and Publishing at Ripley Entertainment, told The Daily Beast. “We felt it was a way to bring something old and very iconic to a new generation.”


In the comments, there were also thoughts that the Kardashian person has always been the main target of attacks from society. The version was indirectly confirmed by fashion historian Keren Ben-Khorin, noting that Kim fulfilled the unattainable dream of many people on the planet:

“We all have a fantasy to wear something from the museum. This is what makes fashion shows so successful. But you can't do that."

The official account posted a new entry. This time, the socialite was no longer blamed for the cracked fabric, but insisted that 7 crystals were missing. the same video of the fitting was attached as evidence: in it, the museum staff dress Kim and hear the advice to “put your ass down.” Kardashian has not admitted to the allegations.