“This will Cement Him as a Real Name in the Men’s Fashion World": Brooklyn Beckham Becomes the Face of Superdry | World Fashion Channel
Our site uses cookies and similar technologies to ensure the best user experience by providing personalized information, remembering marketing and product preferences, and helping you get the right information. By continuing to browse this site you agree to our use of cookies following this notice concerning this type of file. If you do not agree that we use this type of file, then you must set your browser settings accordingly or not use the wfc.tv website.

Home / Articles / Сelebrities / “This will Cement Him as a Real Name in the Men’s Fashion World": Brooklyn Beckham Becomes the Face of Superdry
by Tamila Kurbanova

The eldest son of Victoria and David Beckham, 22-year-old Brooklyn, took another step in the conquest of the fashion industry and signed a contract with the British streetwear brand Superdry. It is reported that the deal was worth about $ 1.3 million. The first event, which he will attend in the new status, will be the opening of the brand's new boutique on Oxford Street in London. In addition, Brooklyn has shot a new campaign for the British streetwear brand – with himself posing with his tattooed chest exposed beneath an open outdoor jacket.

A source told The Sun, that Brooklyn has chosen to support the Superdry brand in large part because its founders, designers Julian Dunkerton and James Holder, place great emphasis on caring for the environment and various eco-initiatives. A source said: “This is a huge opportunity for Brooklyn and will cement him as a real name in the men’s fashion world. It’s a great gig for him to land and has given him focus. He’s really keen on sustainability too, so he’s excited to get stuck in.” 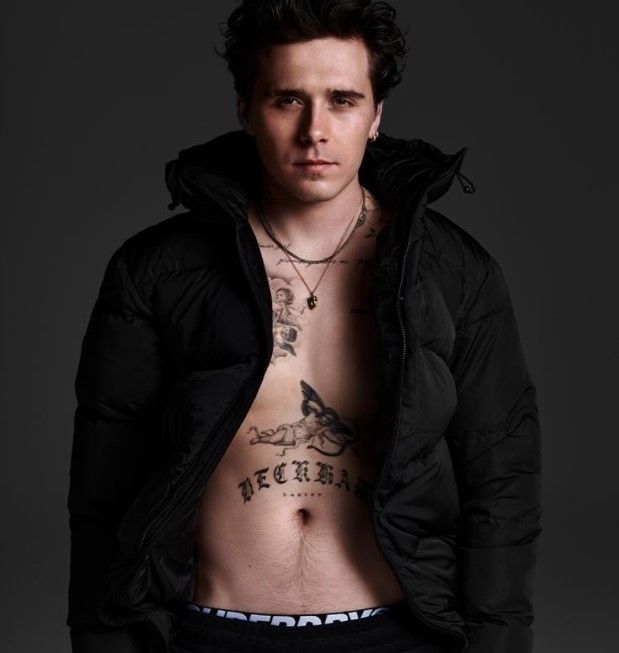 The contract with Superdry was far from the first in Brooklyn Beckham's career. He recently starred in an ads for Pepe Jeans with his fiancée, actress and model Nicola Peltz. Until 2015, under the guidance of his father, he was professionally involved in football, but then announced that he had no plans to connect his life with sports and decided to try himself in show business.