“You're Gonna Be Naked ": Megan Fox Reveals Who Made Her Wear Naked Dress for the MTV Video Music Award | World Fashion Channel
Our site uses cookies and similar technologies to ensure the best user experience by providing personalized information, remembering marketing and product preferences, and helping you get the right information. By continuing to browse this site you agree to our use of cookies following this notice concerning this type of file. If you do not agree that we use this type of file, then you must set your browser settings accordingly or not use the wfc.tv website.

On the evening of September 12, Megan Fox stormed the MTV Video Music Awards, which took place at Brooklyn's Barclays Center. The ceremony was timed to coincide with the 40th anniversary of MTV. Especially for this event, the actress opted for one of the most provocative and revealing outfits in her entire career - sheer illusion dress by Mugler. As the star admitted a few days later, the idea for this look belonged to her boyfriend, musician Machine Gun Kelly, who wore a custom crimson patterned tuxedo. "He was like, 'You're gonna be naked tonight,'" Fox said. "I was like, 'Whatever you say, daddy!'". The star made a splash on the network and delighted fans not only with her gorgeous figure, but also with her courage. 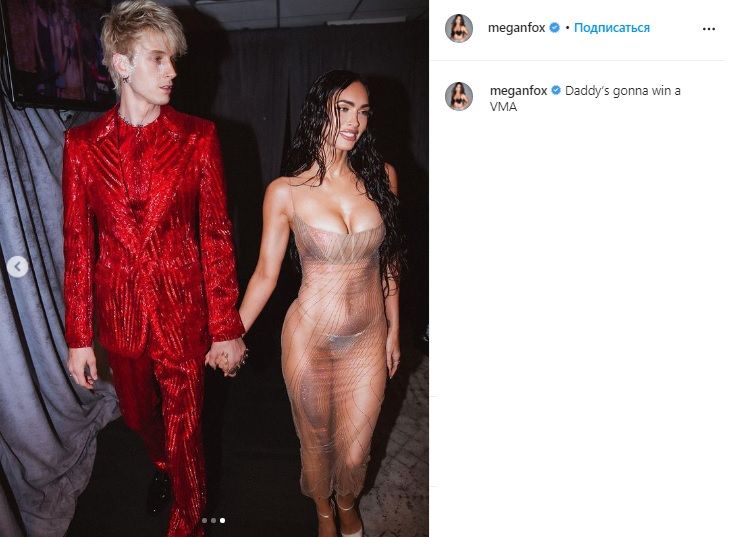 Megan admitted she was “so proud”' of her boyfriend, who went on to win the Best Alternative award for My Ex's Best Friend and performed Papercuts with collaborator Travis Barker during the ceremony. By the way, ahead of the ceremony, MGK and UFC star Conor McGregor were spotted squabbling on the red carpet. During a party, McGregor put his hand out to introduce himself to Kelly, but the star's team allegedly pushed him away. The fighter lost control, threw a glass at the musician and then even tried to hit the musician. But later Conor insisted “absolutely nothing” happened, and branded Kelly a “vanilla boy rapper”.