"When I'm dead and gone, people will know that the twenty-first century was started by Alexander McQueen."

Alexander McQueen's history of life and work is an interweaving of exceptional genius, overwhelming success, and tragic fate. As the renowned provocateur and rebel, he always thought beyond the boundaries and was several decades ahead of his time. However, the general recognition and love of the public important for every creator didn't make him happy or interest him from the very beginning. Alexander McQueen lived in his own reality, which, in addition to filigree ideas, gave birth to something sinister, understandable only to him. 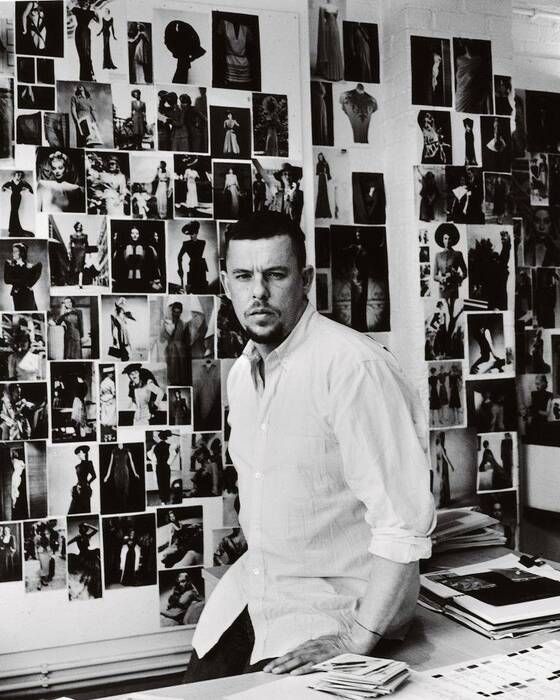 "There is something sinister, something quite biographical about what I do - but that part is for me. It's my personal business. I think there is a lot of romance, melancholy. There's a sadness to it, but there's romance in sadness. I suppose I am a very melancholy person," that is how the designer described his self-awareness and creativity.

Perhaps another attack of melancholy led to a deep depression, from which he could not get out, being under the yoke of accompanying life difficulties. In February 2010, he committed suicide, most likely triggered by the death of his mother, £ 32 million in debt, and constant overwork. McQueen was 40 years old. However, during his short life, the designer managed to receive the title of Best British Designer of the Year four times, be awarded the Order of the British Empire, and create a namesake fashion house, which continues to influence world fashion trends today.

The career of the British designer began very early - at the age of 16, he worked as an apprentice in a London atelier and eventually mastered the specialization of men's suits. In 1991, being a student at the Central Saint Martins, Alexander McQueen presented his graduate work Jack the Ripper Stalks His Victims. The original collection was noted by fashion editor Isabella Blow -  right after the show she expressed a desire to buy the entire collection for 5000 pounds. From that moment on, Blow became the patroness, and later a faithful ally of Alexander McQueen - with her support, the designer founded his own brand a year after the first fashion show.

In the mid-90s, McQueen presented two first women's collections: Nihilism for spring-summer and Banshee for autumn-winter. It was the second collection that laid the foundation for the further aesthetics of the Alexander McQueen brand - a mixture of gothic, romance, and history in the form of elaborate dresses and jackets that spoke of the years spent at the atelier. All the designer's seasonal collections were distinguished by shocking and wild audacity: McQueen was attracted by the aesthetics of darkness and death. The designer wrapped models in cellophane, created grotesque make-up for them, often turned to the looks of witches, ghosts, and shadows. During Alexander McQueen's fashion shows, models walked the runway wearing bloody bandages, tried on looks of vampires, and the dead.

The designer's collections often not only shocked the public but caused a real scandal. In 1994, as part of the spring-summer 1995 fashion show, models in bumster trousers with an ultra-low waistline appeared on the catwalk, revealing the upper part of the buttocks. This was followed by the scandalous collection of Alexander McQueen autumn-winter 1995/1996 called Highland Rape. During the show, models appeared on the catwalk in bloody bandages hanging from under the skirts. In 1998, Alexander McQueen arranged a publicity photo session for the famous model, actress, and amputee Aimee Mullins. The woman was captured in boots imitating wooden human legs. Later, Aimee came on the runway wearing this shoe and became the first disabled model to participate in the fashion show.

Such provocative antics led to various accusations against the designer. After he showed the fall-winter 2009/2010 collection called The Horn of Plenty, McQueen was charged with misogyny. Models' outfits infuriated part of the public – their creepy make-up with bright red huge lips made their faces look like rubber dolls from sex-shops. The headdresses of the models were garbage cans lids and pieces of adhesive tape.

In December 2000, the Gucci Group acquired 51% of the Alexander McQueen brand and appointed Alexander as creative director, opening stores in London, Milan, New York, Los Angeles, and Las Vegas. From that moment on, a gradual mass spread of the McQueen style began. In July 2006, Alexander McQueen launched McQ, a democratic line for men and women. It was exclusively developed by Alexander McQueen and distributed worldwide through SINV SpA under a five-year license agreement. Three years later, McQueen's crazy garments have found their way into the music industry. In November 2009, Lady Gaga presented a video for the Bad Romance song - several outfits and pairs of Alexander McQueen shoes were chosen for the video, including a gold dress and iconic Armadillo heels.

In the same year, at Paris Fashion Week, Alexander McQueen presented a women's collection called Plato`s Atlantis, which became the most discussed work of the spring-summer 2010 season. During the show, pictures of the creation of the world, raging waters, the movements of snakes were displayed on a huge screen. For this video series, models appeared on the catwalk in sets with patterns of a cobra, fantastic fish, and animals. The collection featured a complicated geometric cut: wide shoulders, voluminous sleeves, and oval hips. The audience gave McQueen a standing ovation, and critics later called the collection an incredible art phenomenon. This futuristic collection became the designer's goodbye work.

After the death of the fashion designer, Sarah Burton, who had been a student of McQueen and had worked in his fashion house since 1996, was appointed as the new creative director of the brand. With her arrival, the rebellious style of the Fashion House has become more feminine and less shocking. She did not copy the theatrical style, referring to the fact that only McQueen could create the whole performance. Sarah Burton has managed to preserve and develop the aesthetic traditions of the brand.